You are using an out of date browser. It may not display this or other websites correctly.
You should upgrade or use an alternative browser.
D

Hey everyone! I added a new spam detection recently. At the moment, it's still just 'listening' and logging. Soon (probably within the next week) it shall start to warn players automatically.
Warning basically means, that they receive a private message telling them to stop spamming. If players should keep spamming, further actions might be taken (for current plan, that would just be a direct report to admins on discord).
So obviously the idea is to reduce spam in chat by directly warning players if they spam more than they should and if warnings don't help, admins may react faster to it.

I gathered some stats by applying the current algorithm on the messages since 2021 (around 10 million messages btw).
In the following table you can see for each months how many warnings the bot would have sent and to how many players (obviously players might be warned more than once when repeatedly spamming). It also shows how often reports would be sent to admins and for how many different players.
Please keep in mind that especially the number of reports is not reliable and surely higher than it would have been if warnings really would have been sent by the bot. So in theory there could be like 3-5 reports to admins per day, but in practice the number will be probably smaller. 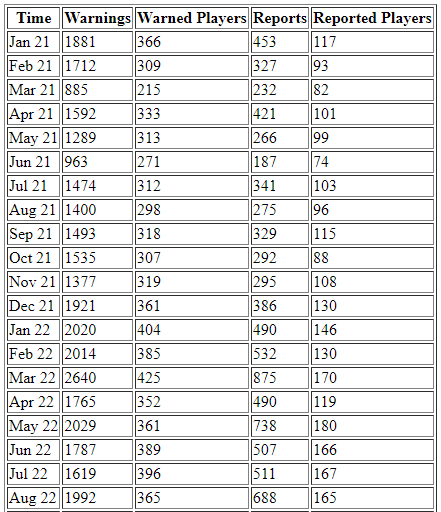 There is also a greyzone situation in regard to !scream. There are valid reasons to spam !scream command. But first of all there is no valid reason to spam it with useless extensions like "!scream who let the ducks out?!". Additionally the invisible /scream command can be used as well. So in situations where !scream is spammed, the bot will suggest the player to switch to /scream instead.
Also some statistics for !scream: Since 2021 217 players WOULD have received a warning and 63 of them (assuming they all would have ignored the warning) would have been reported.

So the current idea is to enable the warnings until end of the month. Then within the next weeks I'll take another look at the stats and check if the spam decreases. Afterwards (if accepted by ha/spa) direct reports would be enabled.

In future I might also reactivate the foreign language and insult detection and handle it in a similar fashion. But it may take a bit since those algorithms require some more supervision.
Reactions: SOUR and Soup^
D

I use the /zstuck command and get those warnings also?
D

@Ciftyfent Maybe I misunderstood you but it sounded like you already received a spam warning from the bot?!
I checked the logs and so far not a single of your messages has been interpreted as spam, therefore you also shouldn't have seen any warning unless you are talking about a different account than this one:

Those commands starting with / instead of ! dont generate a message in chat and will therefore never lead to a warning. !zstuck is also a special case that does not lead to a warning right now since a frequent use is actually needed. It may lead to warnings in future but only if the bot can verify, that it is spammed for no good reason. The sad truth is that 40-50% of the chatlog consists of !zstuck commands, so using /zstuck might really help to clean up the chat. ;-)

Maybe also some additional notes:
There exists different types of spam. Writing all the time in uppercase letters can also be considered as spam (or as aggressive, attention-seeking...).
Receiving a warning for spam does not mean that it is something really bad so far and usually nothing that deserves a punishment. These warnings let players know that their chat behavior is not ideal and could possibly bother other people. It is also a indicator that it may be a good time to stop cause if you continue, it might really start to bother more players and may deserve harder reactions. Especially when those players should receive such warnings over and over again.

So right now a lot of warnings are sent (as the stats in my first posts already show). Making players aware about it will hopefully reduce that number significantly, especially the number of reports. The current plan is to observe how those numbers changes in the upcoming month and if needed the thresholds might be adjusted. I surely dont wanna send reports twice per hour to admins. If numbers stay that high, it would be a clear indicator that thresholds for reports should be raised. ;-)
Reactions: Paw

Thank you for your Reply Data. I have checked the Message again and it is no Spam Warning. It just told me that i have to wait a few Seconds, so i can use this Command again.

I hope more People will use the /zstuckcommand in the Future. Clears out the whole Chat
D

Ah yeah that message is normal and exists for ages. It has nothing to do with the bot. ;-)
D

After one month I can provide some new numbers.
The total amount of detected spam messages decreased by 40% which likewise ended in 35% less warnings being sent out by the bot. The number of times a report would be generated has even reduced by ~55%.

Even though I was hoping for some numbers to decrease even further, it's already a good start I think. Also some people took some time to adjust their bindings or needed a reminder first, so the numbers could decrease a bit more in future. But from what I saw I can also tell that several players don't care at all about warnings from a bot (some also ignored the warnings from real admins as well).

More than 25% of the produced warnings are sent to a subset of only 10 players. And 25% of reports are limited to only 5 different players. So if we can convince these few players to adapt their chat behavior a bit, this could make quite a difference.

Thresholds for reports have been increased so that focus can be put towards the more intense spammers. I will observe the next few days if the current setting is fine or needs further refinement.
Reactions: denied and easy
You must log in or register to reply here.
Top Bottom